The story that everybody read

New Atlantis was published posthumously in 1626 or 1627 as a second part of a volume entitled Sylva Sylvarum or a natural historie in ten centuries. Soon it became a bestseller. To date, it has been impossible to establish how many editions of this volume were printed in the seventeenth century. We know of two Latin translations, a French translation and at least a dozen of English editions. Bacon’s Sylva (and hence the New Atlantis ) was the book that everybody read, in London, in Paris, in Amsterdam – in fact, across the whole Europe. It spoke directly and convincingly to a large and diverse audience, cutting across national, confessional and philosophical divides.

Everybody read it; but clearly not in the same way. In fact, few books so popular gave rise to so many diverse and conflicting interpretations. Some took it to be an ingenious fancy, a `romantick model,” (Joseph Glanvill) a “poetical commonwealth” (Robert Burton) or a novel (in a letter, Nicolas Fabris de Peiresc says – I have heard that Chancellor Bacon has begun to write “des romans”). Then, there were those who saw in it the blueprint of a society – for instance a secret society,or a new “scientific” society (whatever that meant at the time). Or a political utopia where the main source of power is knowledge and the ability to manipulate nature. Or read it as a utopian plan for a future humanity governed by reason and by a strange alliance between a godly science and a rational religion.

So maybe a good starting point to read the New Atlantis is to consider its literary form. It is the prerogative of great art to give rise to so many interpretations.

Is the New Atlantis just a remarkable literary piece? If it is, this is by no means evident. To the reader of More’s Utopia, for example, the New Atlantis looks clumsy and devoid of all mystery. There is nothing of the word-play we find in Morus. No sense of humor, no cling of the eye towards the reader, no elegance of style, no beautiful metaphors, no long and beautiful phrases. There is a certain abruptness of style, there is a bit of a travel-log feeling about the New Atlantis. Its force comes from the striking images: the scene of the religious conversion of people from Bensalem has some theatrical force; the description of the Feast of the Family is imaginative and colorful, the House of Solomon stands out and offers a lot to the imagination.

What genre of writing is this?

New Atlantis was published posthumously by William Rawley, Bacon’s chaplain and amanuensis. In the added preface, Rawley claims New Atlantis to be an unfinished fable. It was Bacon intention, Rawley says, to complete New Atlantis with a “part” on the rules and political organization of the imaginary commonwealth of Bensalem. The way these two claims were read during the centuries varied very much according to how familiar the reader was with other parts of the Baconian corpus. None of Bacon’s writings was ever finished; in fact, Bacon developed a whole theory of the pedagogical and heuristic value of the fragmentary. As he developed a theory of the fables, imaginary devices used in the process of teaching, learning and discovery. But what does New Atlantis teach us?

What is this fable a fable of? Bacon has many fables; in fact, he wrote an entire book on how to write and interpret fables (De sapientia veterum – On the wisdom of the ancients, 1611). His fables are stories featuring striking images of gods and nature engaged in memorable actions: Prometheus stealing the celestial fire, Orpheus playing to wild beasts, the Sphinx engaging humans in mortal intellectual competitions, Pan hunting for the hidden goddess of plenty, Ceres; and more. Each of these striking images is then given a meaning through a process of interpretation and identification. The hidden goddess, Ceres, represents arts and sciences, while the hunter-god Pan is Nature (engaged in an interesting process of self-unveilment, which Bacon takes to be an allegory of the search for truth). Prometheus stands for Providence, and Orpheus for philosophy. What does the New Atlantis stand for? Or the island of Bensalem? Or the Solomon’s House?

Typical for Bacon’s fables is that they consist in a series of tableaux vivant. There is little plot and sometimes no action. The fable is a collection of emblems, plus the `interpretation’ (i.e., a process of identification, element by element, of the various parts of the tableaux). In a similar manner, New Atlantis has its own tableaux – usually presented as stories in a story: the conversion of Bensalem, the establishment of the Solomon’s House, the story about the marital customs of the Bensalemians, the Feast of the Family, the entrance into the city of the Father of Solomon’s House, the structure, customs and offices of the Solomon’s House itself. But the interpretation is missing. It is left to the reader to fill in the gaps. And in this particular sense, the New Atlantis is unfinished. It is also in this spirit that some set to continue and complete the story, giving it all sorts of twists and meanings. 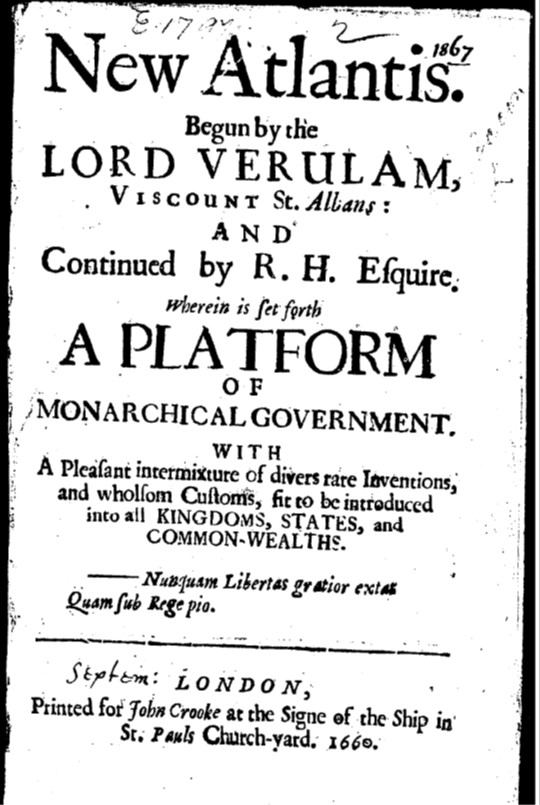 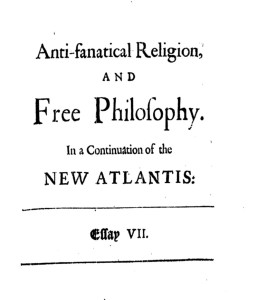 In England, in the 1660s, two such continuations make the New Atlantis a framework in which new projects are imagined: a project of an enlightened, tolerant and anti-fanatical religion (Joseph Glanvill) and a project of a knowledge-based monarchical tyranny. Wisely, the later continuation of the New Atlantis has appeared anonymously, under the initials R.H (see image). And this was not only an English phenomenon (as you can see from the image below:  the title page of a French book printed in Paris, in 1702).

Gaps and mysteries in Bacon’s story

There are many gaps in the New Atlantis. But again, seeing them depends on where you position yourself as a reader.

If you read the story from the perspective and with the conventions of the travel literature, the story is unfinished because it ends in the middle, before the message becomes clear. What are the travelers supposed to bring home with them? Is the traveler narrator a sort of Raphael Hythlodaeus? Someone who would return home to tell a story that no-one is going to believe? There are some references in Bacon’s text that would support such an interpretation.

If we read the New Atlantis from the perspective of the “utopian literature” (More, Campanella, Patrizzi) then one is struck by the complete lack of a pedagogical scenario in it. The citizens of Bensalem are being born (as a result of a complicated set of state-governed policies and procedures) and we then see them as adults, in different stations in life. Some even become members of the Solomon’s House. What happens between these two moments? How are the citizens educated? Are they educated at all? Or is the new science so powerful that traditional education becomes unnecessary?

If you read the New Atlantis as a sort of blueprint for the new science, you see other gaps and mysteries. There is a lot of secrecy going on on Bacon’s mysterious island. Solomon’s House has a service of gathering information uncomfortably similar with an espionage agency. Merchants of light are traveling the world to bring home books and secrets. They do not impart knowledge to the rest of the world. They plunder and steal and hide; and no one knows who and where they are. No wonder that the New Atlantis became a favorite book with some of the late seventeenth century “Rosicrucians”. The seventeenth century loved conspirations even more than we do. And there is of course the religious and political involvement. Bacon’s Solomon’s House seems to be the depositary of Truth: its membershave a direct line with God, and another direct line of command with the king (if there is such a person in the story, which was often a subject of debate). One wonders whether, for Bacon, religion is called upon to legitimize and empower the natural philosophy, or it is rather they other way around? Is the priest of nature the only one entitled to receive (or able to comprehend) the revelation? More generally, did Bacon perhaps believe that we need first to learn, build societies, develop technology, set up a knowledge-based society to be able to receive and comprehend the true religion?

The fable-like character of the New Atlantis was not lost on its readers. One common convention of reading in the past 400 years has been that what we have in Bacon’s story is a sort of allegory of science. But whose science? Bacon’s science (i.e., the conception he had about the science of his day)? Bacon’s dream of a future science (the product developing from his other works, such as the Novum Organum)? Bacon’s blueprint for how to build a new science starting from natural histories such as the Sylva Sylvarum? According to the standpoint we adopt, we will read and interpret Bacon’s allegories very differently. And so did Bacon’s immediate followers. Hence the wide diversity of interpretations which are likely to capture our imagination to this date.

Associate Professor in Philosophy, Department of Theoretical Philosophy, University of Bucharest. View all posts by danajalobeanu